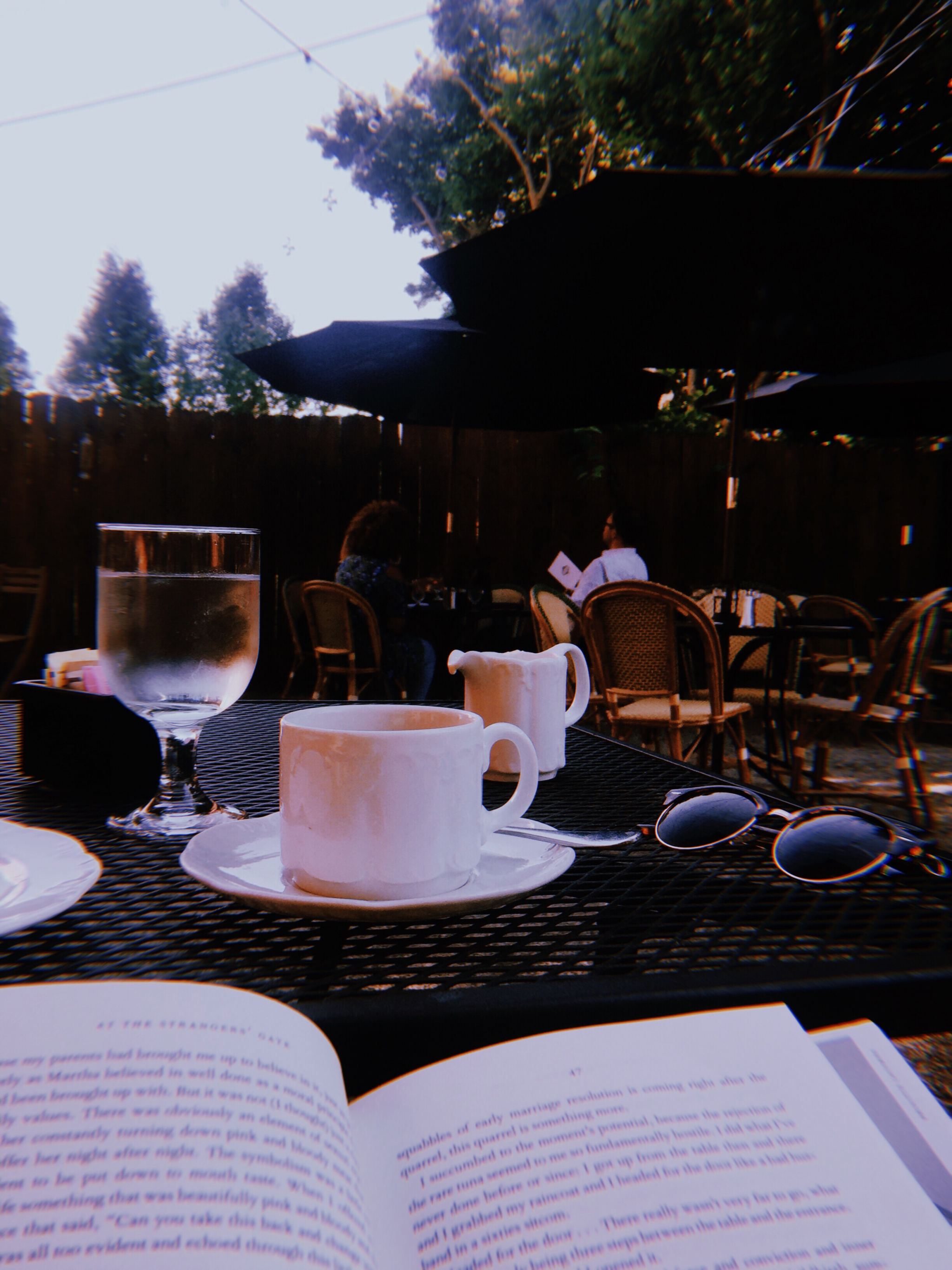 Last night, I did that thing where you get all dressed up, go to a fancy restaurant, order an expensive dish, by yourself. Going on a date solo has always appealed to me, given that my mind usually associates the act with strong female leads traveling in romantic comedies, unconsciously romanticizing the event as a rite of passage to independence and confidence.

I dressed for the occasion. “American in Paris” was the character I was going for, even though it’s just a French restaurant on Main Street in Buffalo and there was a high probability I’d run into someone I knew. Didn’t let that kill my vibe, or theme. I listened to Carla Bruni sing sexy French songs on the way there. I didn’t understand a word she was saying but I assumed the lyrics were poetic and about love, which is a pretty safe assumption, really. I wore my favorite denim skirt with a lacey black cami (that I got for four dollars at Savers), a silky neck scarf and tan, heeled sandals. Though it’s not far from my daily uniform, I felt it was a bit more French. Monochrome, unmatched, hint of denim and subdued colors in an imperfect way. Or at least, that’s what I strived for.

Once I got to Coco, early for my 5:45 reservation and ravenously hungry after working a couple jobs starting at 4:30 a.m., the waiter looked at me surprised and said, “for one?” “Yes.”

Surprisingly, that two sentence exchange was really as awkward as it would get. He led me through the dim-lit dining room with blatant French decor touches that at times, may tiptoe near cliche but mostly remain novel and chic, and out to the back patio. Lights, that weren’t on because I was pretty much having the early bird special, crisscrossed between the brick restaurant wall and the tall brown fence, protecting the privacy of diners as much as the Allentown neighbors. The chairs were classic French or at least the classic American interpretation of French. A couple tables were filled with a few people, who didn’t bat an eyelash, probably assuming I was early for a date. After taking my spot at a table near the wall and the waiter removed the chair reserved for no one, he handed me the menus. Should I try to order a glass of wine, though I’m a few months shy of the legal? He probably wouldn’t have checked, almost definitely he would not assume a 20-year-old girl would go to a nice French restaurant alone, but I resigned and settled for a coffee. Anyways, bottomless coffee is cheaper and after four cups, has a similar effect.

After pondering the menu, thinking of ordering a salad, though it would undoubtedly not have been filling enough, or maybe a flatbread and soup, or maybe my trusted always safe mac and cheese, I had a realization: If you are going to do something as weird as taking yourself on a nice date and you don’t allow yourself to get something fancy then one, you’re not treating your date well and two, what’s the point? So, inspired by the great Anthony Bourdain, I tried something new. I went on a date by myself and I ordered pan-seared duck.

When the duck came out, I felt a bit panicked. It looked like steak and I detest steak. Even the supposedly best steak I’ve had was really, just… gross. After trying it though, my fears subsided and a new thought dawned on me: damn, this is so much better than my usual meals of Tim Hortons breakfast sandwiches, cherries or Panera mac and cheese. Well, maybe not the latter. But the duck and sweet potato thing with it was incredible. For what it’s worth, Coco (this was my second time going) is now one of my favorite restaurants in Buffalo.

During my whole date, I felt great. Nearly meditative, sitting in a charming atmosphere, free of the pressure of conversation and free to succumb to my personal thoughts in an uninterrupted space. I read some of Adam Gopnik’s At the Stranger’s Gate, which is so well-written the sentences practically drip with deeper meaning, partially hidden behind fun, witty stories.

My final verdict: I may have let Eat, Pray, Love influence me more than I ever would have thought it would, but I realized that taking time out, doing something you purely enjoy, like relaxing at a nice restaurant anticipating great food, is important self-care. I get stressed often, so being able to be alone with my thoughts, a book, some coffee and pan-seared duck, was more comfortable than sitting at home on my laptop “relaxing” or attempting meditation. Sometimes you need to figure out what you love, in my case it’s going cool places that generally involve filling my always-hungry stomach and do it. Alone.

And since, I had the idea to write this blog post last night, (which is another indicator of me being at peace), I started a list in my notes app of how I felt, sitting there alone. Thought I’d share: 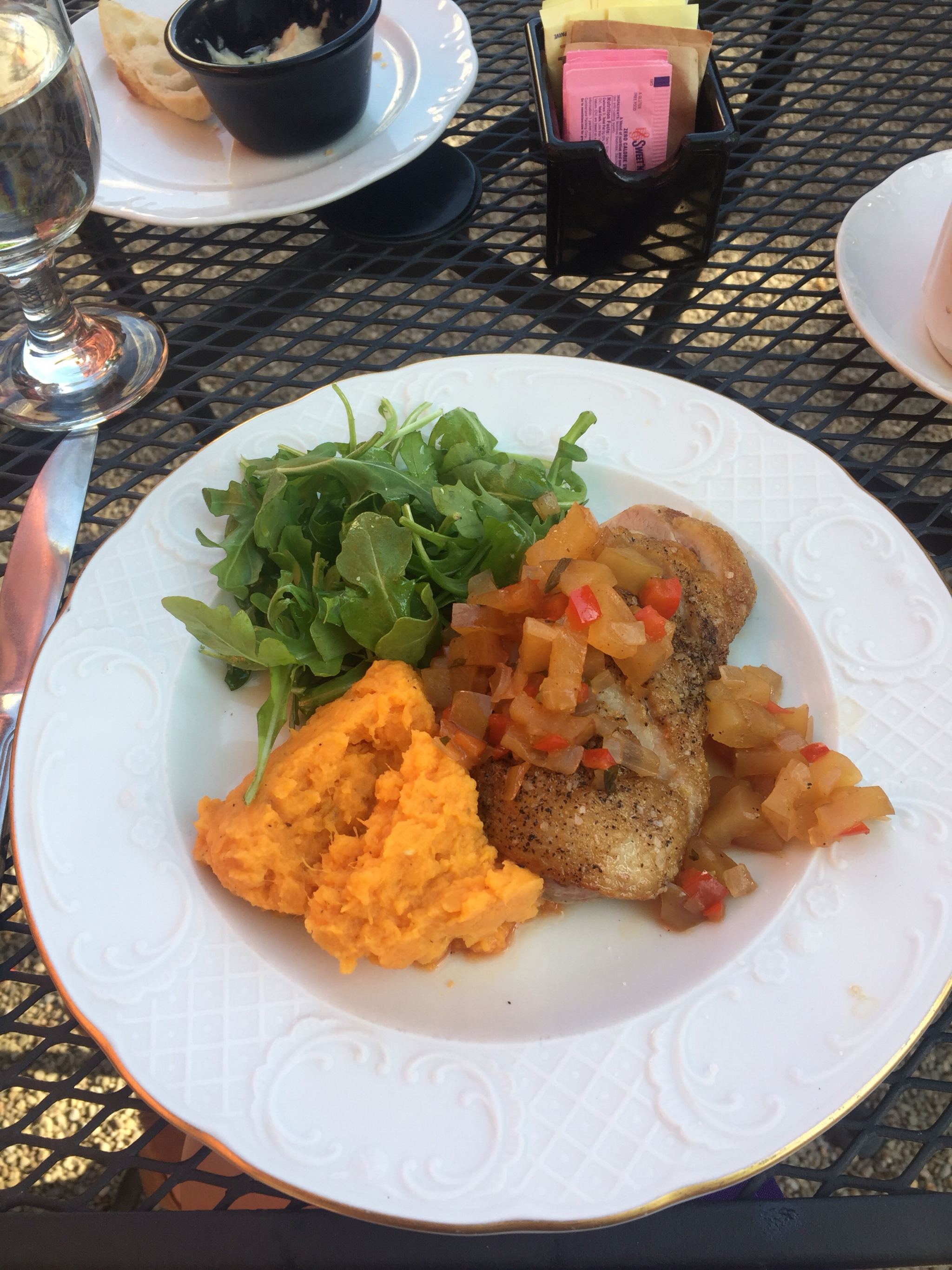